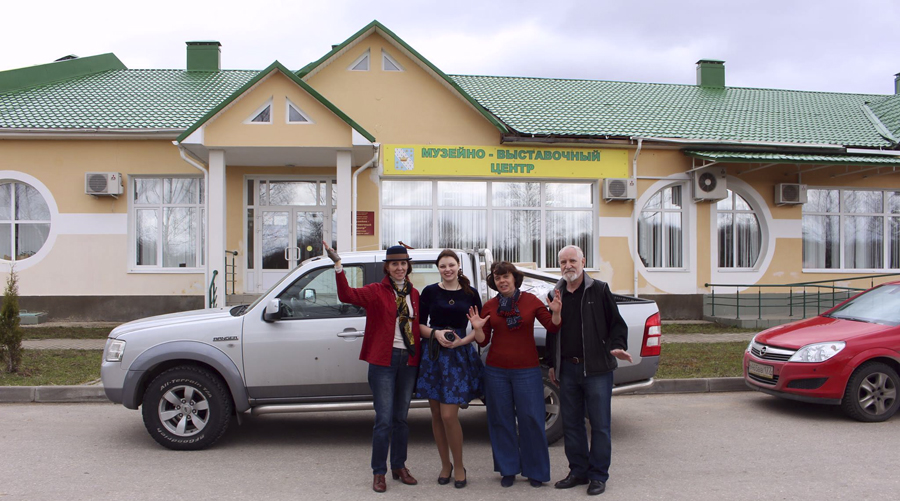 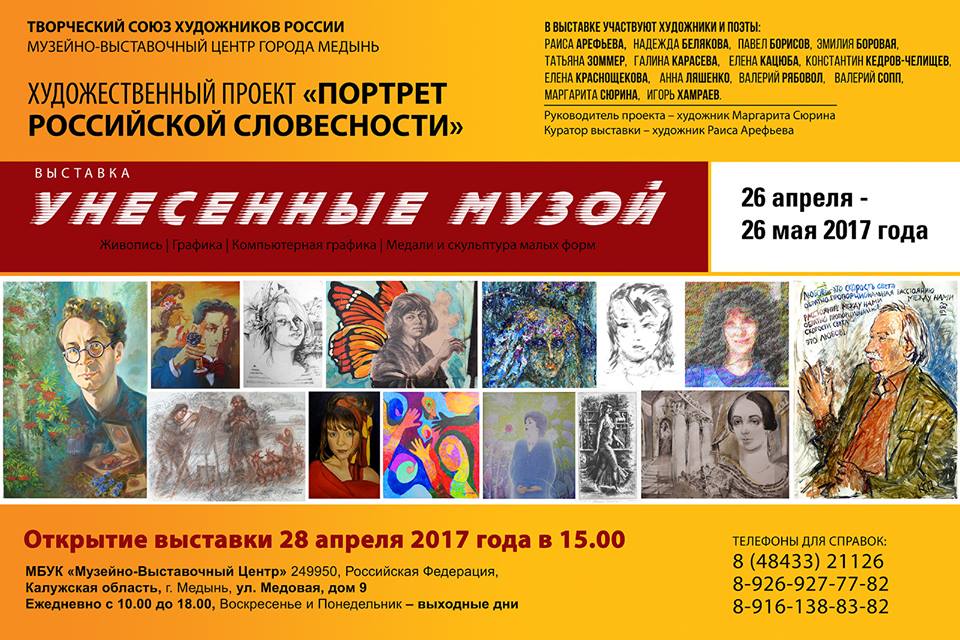 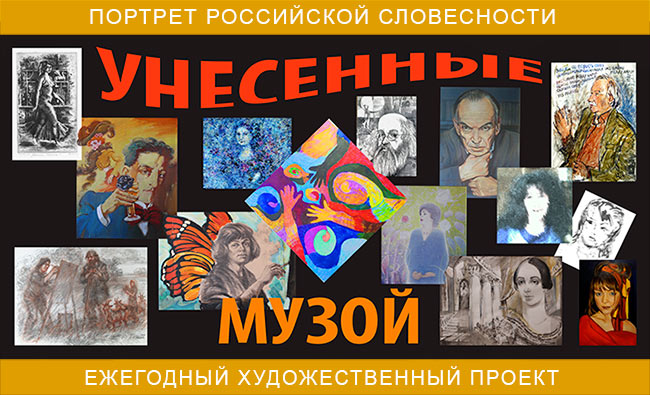 EXHIBITION
«GONE WITH THE MUSE»

The following artists and poets participate in the exhibition:

Pavel Borisov 'Alexander Blok'
Pavel Borisov
"Alexander Blok"
Muse in the dress of spring knocked to the poet,
Covered with the darkness of the night, whispered vague speeches,
The flowers’ petals smelled sweet, brought by the wind
To the bed of the earth’s tsar and messenger of heaven…

Art project «PORTRAIT OF THE RUSSIAN FINE WORD» starts its exhibition season of 2017 with a mobile group exhibition «GONE WITH THE MUSE» in the Museum & Exhibition Centre in the city of Medyn in the Kaluga Region. From April 26 to May 26, 2017 creative group of artists and poets of the project will present collection of authors’ works dedicated, as usually in our tradition, to the Russian culture and literature; but this time with it is emphasized sharp tendency in the present – with a pronounced tendency to show a face of the hero of our time.

The concept of the exhibition «GONE WITH THE MUSE» is constructed on a triad – a self-portrait, a men's portrait and a female portrait. By this principle each participant of the exhibition in Medyn made the series of works for a spring season of the project «PORTRAIT OF THE RUSSIAN FINE WORD». The idea of such selection of works for the exhibition was offered by the artist Igor Khamraev that was instantly supported by other participants of the project and was accepted to implementation and embodiment. Practice of display of group exhibitions is widely known and is everywhere widespread on separate subjects: "Self-Portrait", "A Men's Portrait" or "A Female Portrait"; when each genre is carefully analyzed and deeply studied in itself, out of a context, without interaction with others. And so – without identification of the harmonious or contradictory communications which are inevitably arising by comparison of such difficult and different concepts as: a man and a woman, an artist and a model, a transcendental object and a thing for others. But the art project «PORTRAIT OF THE RUSSIAN FINE WORD» from the very moment of its emergence in August, 2014 declared need of synthesis - as the fundamental principle of interaction in the modern art. As between different types of art – synthesis of arts, and various directions and currents in art – synthesis of genres and stylistics. And therefore the concept of simultaneous display at the exhibition of the triad – a self-portrait, men's and female portraits, is not only creative and vanguard, but also, inherently, absolutely expressing the global idea of the art project «PORTRAIT OF THE RUSSIAN FINE WORD» where the word portrait always sounds as the main word in the name.

In the Museum and Exhibition centre in the city of Medyn faces of the compatriots, for several last decades who are attentively peering equally both to the world around, and in themselves will appear in front of the viewers: what a difference in an interpretation of a female or men's image in a portrait? How to express it by composition, linearly or by color spot? How we see ourselves and – how does it correspond to the view of others? The gallery of self-portraits of artists of the project will be presented in the widest emotional and analytical cut – from an ironic and grotesque view of itself to poetic and sublime, from abstract and discharged to photographic - documentary. At the same time in most cases each artist will show several self-portraits – very different in emotional and semantic fullness and expressed, respectively, by very different art languages.

Co-creation of the artists of the project «PORTRAIT OF THE RUSSIAN FINE WORD» and the literary society DOOS for three years of collaboration is one of the brightest examples of fruitful synthesis of arts in modern national culture. The portraits of poets of DOOS performed by artists Margarita Siourina and Valery Sopp, Valery Ryabovol and Galina Karaseva, Igor Khamraev, Nadezhda Belyakova, Emilia Borovaya – have been created for the last several months in a unique program of verbal and visual master classes in the art studio of the head of the art project.

Not less important place will be taken at the exhibition in Medyn by portraits of poets of literary association named after Dmitry Kedrin, with a header portrait of Dmitry Kedrin (whose anniversary is celebrated this year). All the portraits are executed by one artist – Raisa Arefyeva who for many years is successfully creating gallery of portraits of our contemporary poets –followers of Kedrin. And in full compliance to traditions of the project «PORTRAIT OF THE RUSSIAN FINE WORD» faces of classics of domestic literature will appear in front of the audience of the city of Medyn: Ivan Turgenev and Alexander Blok, Konstantin Paustovsky and Yakov Polonsky, but this time in the full accord to the name of the exhibition – in a combination, or in opposition with female images: Polina Viardo and the Stranger, the self-willed Gipsy or the Kustodiev beauty executed by artists Pavel Borisov, Anna Lyashenko, Raisa Arefyeva and Elena Krasnoshchekova.

In the spring each person becomes a bit of a poet and an artist. So let us wish each other a bright meeting with a muse, and even moreover – a cheerful meeting with muses, let them knock on our hearts and remain with us for a long time...